Perspectively, the tongue is the smallest part of the body that is engaged in conversation.  It has the power to deliver words intended to create a reaction from the person those words are directed to.  It starts with a thought.  The thought transforms into words.  The words are then conveyed through the tongue.  It is like a rudder that stirs the ship.  It gives comfort to the broken-hearted, it encourages, or it… kills.

If a father or a mother spanks a child through discipline, the child will learn but heal.  If they are beaten down by hurtful and discouraging words, their spirits never recover and they go through life broken and insecure.  Consequently, they pass this on to their own children and the vicious cycle continues.  Dr. Phil likes to say, “it takes a thousand “atta-boys” to make up for one insult.”  At one juncture in my life, I had been on the receiving side of this.  All through life I told myself I would never do that to my own kids.  And I didn’t.  I encouraged them and became their biggest cheerleader.  I want to be my children’s confidante.  So far so good.

There comes a point in one’s life when one realizes that when the effects of a childhood such as this is stunting their personal growth, one has to rise above the way you were raised, something you have to do on your own.  The sad fact is that we have to give ourselves what we wished we could get from somebody else.  One may have assumed to be a failure and sit around saying, Whoa is me, and that my parents that could have picked me up and lifted me up didn’t, but you have to give yourself permission to be who you are because the more you know who you are, the less vulnerable you are to becoming what other people tell you who you are.On the other side of the spectrum, if you are the deliverer of hurtful words (I think we all have been in that position before), watch your tongue.  You do not have the right to slice up the masterpiece that God has created because each of us is His masterpiece.

You are SPECTACULAR!  Believe it, accept it and live it! 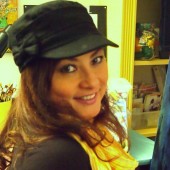