UPON HIS DEATH BED

In this novel we find a dying man unreasonably self-possessed with the lack of control over the inevitability of his death, while he experiences the various stages of dying.

Thus, in accordance with his life long characteristics, he lashes out at the nurse, Sister Agnes, and in an even more viciously, against Sheela Bacchus, his servant.  His inhumane treatment of both women, also serves to obscure his own guilt of having pursued and impregnated a fifteen year old child, Dalia Mendonza, the mother of his beloved son, Payton.

Yet, in keeping secret the whereabouts of Dalia Mendonza, he hopes to emotionally and psychologically control their son from his grave.  Unrepentant, he seeks to avenge the family’s estrangement from him and Payton, due to hte younger man’s illegitimacy and link to the African blood line, through his mother. 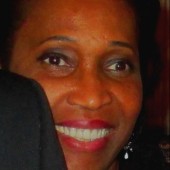 I am the author of UPON HIS DEATH BED, 1st novel in the 12-novel series of The Front House Jumbies. I have worked on this series for 17 years. I am currently editing/reviewing the 2nd novel in the series, The Love Between Mary and Dalia. I jog almost everyday. I also knit and crochet, read, write poetry and other books/novels, ride my bicycle or walk on the the Jersey Shore boardwalk for relaxation. I am practice the spirituality of Kabbalah and I am a life long vegetarian. I am a Professional Registered Nurse, working as on a private duty case. My ambition is to become a successful author and nursing home or halfway house owner. Everyone I meet holds me as a friend, and I feel the same way towards them.