Who knew I was so hard-headed? Fair warning: I am grumpy today. I am tired of being tired. I am sick of being unable to paint for more than a few minutes at a time.  I am sick and tired of laying on my couch. I have had it with sleeping 10 hours and then being exhausted from taking a shower and getting dressed. Surrender? BLECH!

And yet, really, what else is there to do?

The adrenal exhaustion I am experiencing leaves me little choice.

Well, my cynical, annoyed side could rattle off a huge list of “what else there is to do” and after last night it would include — “take an extremely slow walk around the mall WITHOUT it resulting in kidney pain, weakness, and the need to go to sleep at 7pm”, but I digress.

What I meant to share today was the somewhat humorous story of how long it took me to listen to the guidance I have been getting from seemingly everywhere. The guidance that my energy was low and needed replenishing has been coming in loud and clear for years now.

Apparently I needed a psychic hearing aid, or some other clever device that would have let me take the guidance to heart and act on it.

Let me show you what I mean by sharing some details of the intuitions I’ve been privy to for several years now.

And pay attention, I am willing to bet you have some piece of guidance that’s been banging your door down for years as well.

I present to you today for your reading pleasure– my list of partially integrated intuitive guidance surrounding my current health status:

1. Going back to at least 2006 I remember having this ongoing deep, deep craving to curl up in a corner with a down blanket and just sleep for days. I wanted to be in a nest. I ignored this completely and kept going pretty much full-force. Well, actually, I did buy a down comforter, so I guess that counts.

2. In the late spring of 2010 (while still at the job from hell) I had a session with a shamanic practitioner. After the session she shared with me that her main guide told her my energy was so low that she was to tread very carefully, because there was a real danger that I would be unable to integrate whatever healing she offered. Later in the session she was guided to psychically replace a “dead snake” in my spine with another “baby snake” as part of my healing. Having already been told to be careful about what she did with me, she questioned this guidance and heard in response, “Do you want her to die?” I was told to re-energize by getting out into nature and especially being with trees. I took this seriously for about 2 weeks and then my resolve waned. DOH!

4. Once I realized earlier this year that I would need some help healing from what I felt was just the stress of this previous job, I found myself going to fairly regular sessions with a Craniosacral practitioner, a massage therapist, and an acupuncturist. All of them had different ways of presenting me with the same information. “You are not inhabiting your life.” “Your life force energy is very low.” “You look like you have checked out.” “We really need to get on this and bring you back.” “I haven’t really seen anything like this.” “I would think you’d see improvement by now.” I heard them, but again, didn’t really integrate what they were saying. I was still in denial.

5. As part of the Leading a Legendary Life course (the course that started me on the path to painting and inspired me to start this blog) we were asked to write the story of our Legendary Self. To pretty much channel the story without any idea of where it was headed. I found this to be an incredibly powerful process. I would just picture my Legendary self and watch what happened and then write about it. I amazed myself by how easily this flowed for me. I guess I shouldn’t have been shocked when the story took this turn:

Over the next few moments she became increasingly unable to move forward. Her entire body revolted. She simply had to sleep. There was no other option. She became unable to resist this deep need and she sat right where she was. Right on the dusty, rocky earth. The momentum of moving toward the ground continued to act upon her and before she knew what had happened she lay curled in a heap and fell fast asleep, almost instantly.

It all made sense, and yet I kept struggling to find a way to wake her up. To get her moving again. I still haven’t finished the story because she’s still asleep (for the third time, actually). There’s no arguing with her need for this sleep.

6. This summer I had an opportunity to experience a Life Between Lives session. It would take a lot to explain these sessions and there is plenty of information out there, so I’m going to just jump right in to what I experienced. Sometimes as part of these sessions people have an opportunity to stand in the presence of some of their higher level guides. Usually this involves you receiving feedback on your life so far and thoughts about where you are headed. In my case when I met these guides they immediately urged me to lay down (something the facilitator who was guiding the session has *never* seen happen) and they all gathered around me and took turns laying themselves on top of me in an attempt to recharge my energy. I know some of you will be skeptical, but this was an incredibly powerful experience. And once again, it didn’t totally sink in that I needed to take this advice seriously…

7. Just last week I had another session with my naturopath to address the adrenal fatigue. This brilliant health care provider also does shamanic work. During the session he stopped and shared a vision he was having which I will paraphrase here. He saw me “bleeding out”, losing energy and in a state between life and death. My family was begging me to stay and I was refusing. This hit all to close to home for me.

So, while it has taken me far too long to heed the guidance about my need to take time to re-energize, there is no doubt that it has been flowing to me for years.

I hope that by sharing my story I might inspire you to take seriously the guidance that is flowing for you.

And even though sometimes I get grumpy and discouraged, mostly I am curious and in awe of what is unfolding for me. A deeply transformational process is underway. *THAT* is what my guidance says today.

Read more about my journey here. 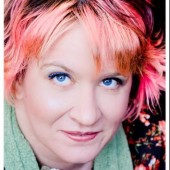 Sheri Ann Ponzi paints, lives, and loves in Kingston, NY. She's blogs regularly,sharing her musings on painting and creativity, following your heart, and her personal journey to heal from Adrenal Exhaustion. You can read more of here writing here: http://paintingherselfintobeing.wordpress.com