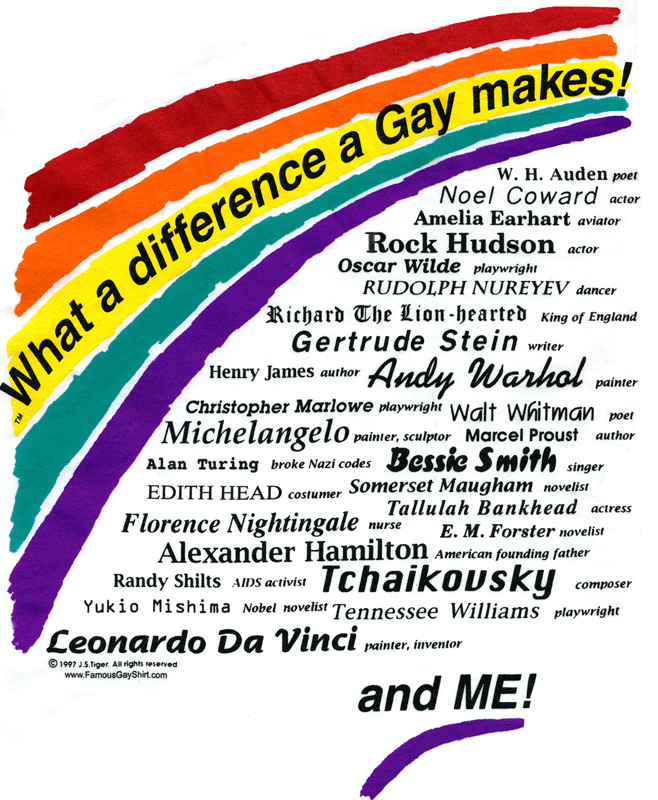 (Should Gay History be included in the California School Curriculum and Textbooks?)

G- Genovese, Catherine Susan  (Kitty) (July 7, 1935-March 13, 1964), was a New York City woman who was stabbed to death near her home in the Kew Gardens section of Queens, New York on March 13, 1964. Genovese shared her Kew Gardens, Queens, apartment with her lover, Mary Ann Zielonko

The circumstances of her murder and the lack of reaction of numerous neighbors became a rallying call for apathy of crime when it was reported that 38 people witnessed her murder and didn’t contact the police.  This case became known in psychological circles as the “bystander or Genovese syndrome.”

A -Jane Addams (September 6, 1860 – May 21, 1935) was the first American woman to be awarded the Nobel Peace Prize. In a long, complex career, she was a pioneer settlement worker, founder ofHull House in Chicago, public philosopher (the first American woman in that role), sociologist, author, and leader in woman suffrage and world peace.

Y-Ken Yeager is an American politician from California, 2000-2006 serving on the Santa Clara CountyBoard of Supervisors, representing District 4. Yeager is openly gay, and the first openly gay elected official in San Jose. His long-time partner is Michael Haberecht.

H- Harvey Milk – American politician for the San Francisco Board of Supervisors and gay rights activist.  prior to his murder committed by Dan White. “What set Harvey apart from you or I was that he was a visionary. He imagined a righteous world inside his head and then he set about to create it for real, for all of us.” Milk was posthumously awarded the Presidential Medal of Freedom in 2009.

I-William M. Inge May 3, 1913 – June 10, 1973) was an American playwright and novelist, whose works typically feature solitary protagonists encumbered with strained sexual relations. In the early 1950s, he had a string of memorable Broadway productions, and one of these, Picnic, earned him a Pulitzer Prize. With his portraits of small-town life and settings rooted in the American heartland, Inge became known as the “Playwright of the Midwest”.

(2) 1969 TheStonewall riots transform the gay rights movement from one limited to a small number of activists into a widespread protest for equal rights and acceptance. Patrons of a gay bar in New York’s Greenwich Village, the Stonewall Inn, fight back during a police raid on June 27, sparking three days of riots.

T- (Lucie Blue) Tremblay (Born 1958 in Montreal) is a Canadian folk singer-songwriter, who performs music with lesbian themes. She writes and performs material in both English and French. Her debut album, released in 1986 by Olivia Records, was voted Top Ten Album of the Year by the Boston Globe.[1]

O- Olivia Records…..Olivia Cruises Founder and president, Judy Dlugacz, conceived and created Olivia Records in 1975 featuring women’s musical artists, producing 40 albums and sold over a million records.  This was the genesis of Women’s Music as a genre.

Olivia Cruises started small in 1990 with a single voyage on a tiny ship. But 20 years later, the lesbian cruise company Olivia has become a major force in the industry, regularly chartering vessels that hold 2,000 passengers or more for all-lesbian vacations at sea. The San Francisco-based company, which has branched out into land vacations as well, has an average of 14 trips in the works, as of 2010.

R- (1) Jerome Robbins (October 11, 1918 – July 29, 1998) was an American theater producer,director, and choreographer known primarily for Broadway Theater and Ballet/Dance, but who also occasionally directed films and directed/produced for television. Robbins was a five time Tony Award winner and a recipient of the Kennedy Center Honors. He also received two Academy Awards, including the 1961 Academy Award for Best Director with Robert Wise for West Side Story. A documentary about his life and work, Something to Dance About, featuring excerpts from his journals, archival performance and rehearsal footage and interviews with Robbins and his colleagues, premiered in PBS in 2009.

(2)Robert Reed-Shakespearean trained actor, appeared in “The Defenders” series and the popular and iconic TV series “The Brady Bunch.” Reed was the patriarchal figure to his blended family of six children.  Although he was frequently unhappy with the scripts, he continued in his role.  Reed had been married and had a daughter, but felt it necessary to be in the closet to his family and audience for the majority of his career.     Internet sources indicate that Reed died on May 12, 1992, at his home in South Pasadena, California, after a six month battle with colon cancer and lymphoma and was previously HIV positive. The acting community and his Brady Bunch family was a supportive surrogate family.

Y-Kenji Yoshino is a legal scholar and the Chief Justice Earl Warren Professor of Constitutional Law at New York University School of Law. Formerly, he was a Professor of Law at Yale Law School. His work involves Constitutional law, anti-discrimination law, civil and human rights, as well as law and literature, and Japanese law and society.. Major areas of interest include social dynamics, conformity and assimilation, as well as queer (LGBT) and personal liberty issues. He has been a co-plaintiff in cases related to his specialties. A Japanese American, and openly gay man, Yoshino also writes poetry for personal enjoyment.

As of April 2011, the California State Senate approved landmark legislation to include gay history as required teaching in public schools. This bill is awaiting approval from the Democratically controlled Assembly and Governor Jerry Brown.

As reported in an AP article for the San Diego Union Tribune,  the language further requires that the California Board of Education to adopt textbooks and teaching materials on the contribution and roles of sexual minorities by the 2013-2014 school year.

The proposed legislation would also prohibit “the adoption of any materials that reflect adversely on the gay community or particular religions.”  (Lady Justice asks how religion gets placed in this context.  The gay community practices all types of religions.  Is this an garbage pail attempt to include everything we can think of in one bill?  And how does one balance teaching about homosexuality and religions which may prohibit gay rights?)

Detractors state that they are already overburdened with mandates, teacher layoffs and teaching for mastery tests.

Bill sponsor, San Francisco’s openly gay Democratic Senator, Mark Leno states, “We are conspicuous in our absence…. Should we delete the inclusion of all the groups that are currently in the statute? Why is that okay and not LGBT? That is discriminatory.”

Earlier, groups who successfully lobbied to ban gay marriage in California also dislike children’s books portraying alternate types of relationships such as “Tango Makes Three,” a picture book about two male penguins raising an orphan penguin.  This book again topped the American Library Association’s ‘most challenged books.”  ( Ladjustice – Oh please… the underlying concepts of compassion, creating a safe and loving family for those who are neglected is the message here…)

The scariest part in the opinion of this blogger is that the bill leaves the hard work of deciding what material to include to what grades and ages…. to individual school districts.

Therefore, no consistency, and perhaps a cursory treatment with little thought, “just to cover them” is a real risk in the opinion of this blogger.   To this point, Republican Senator Doug La Malfa asks, “Are we supposed to remove Winston Churchill from the curriculum to get this type of curriculum in?”

When all is said and done…. It comes down to what principals and teachers deem important enough to teach in the classroom and how much time they have….

The events at the Stonewall Inn in 1969 are considered a defining “Rosa Parks” moment in gay history.  To lean more, please view the following brand new PBS documentary film:

“An American Experience” will be premiering the documentary film, Stonewall Uprising in April 2011.  Award-winning filmmakers Kate Davis and David Heilbroner tell the story of the impromptu battle between bar patrons and police on June 28, 1969 following yet another raid of the Mafia-owned Stonewall Inn on Christopher Street in New York’s Greenwich Village. Most LGBT historians as the pivotal moments described by the Village Voice—in the history of gay liberation..

And… One More Thing….   For an interesting account of Gay History portrayed in a timeline, go to: