What’s In a Name? For Me, It Represents My Journey of Life What’s In A Name?

My blogging life began two years ago as part of my big life transition that involved menopause, remarrying, moving to a new state and an empty nest. Writing became a driving force from within. Words coming from deep inside me, needed to be expressed, and found a home at my blog site. This recent posting was inspired during a morning meditation, as my writing often is. My name was a contemplative thought that morning.

My given name was Laurel Wiljanen, accent on the first syllable of the last name. I have one clear memory of an elementary school teacher pronouncing my name correctly on the first try. Otherwise, it became a lifetime of correcting others. I knew how to say it properly, and still it was difficult to say clearly. Exact pronunciation of this name requires confidence and excellent elocution, the lack of the former in me causing an inability to develop the latter. Many people have called me Laura, Lauren, and Laurie. Sometimes I correct them. Sometimes I don’t. It became tiresome to me. When people mispronounced Wiljanen, same deal. Sometimes I repeated it correctly. Other times I ignored it. Try saying Laurel Wiljanen out loud – it’s a mouthful.

Shortly after I turned twenty-two I married. My name became Laurel Neece. Last name – short and sweet. I experienced jubilance in changing my name, especially to a name that sounded French (but was an Americanized version of a Polish name). Neece is rarely mispronounced. Deep in my sub-conscious, it is conceivable that some of my motivation to marry could have been to take that sweet little last name, releasing the one I had grown to loathe for its inconvenience and awkwardness.

During my adulthood, I have grown to love my first name, Laurel. I correct others (most of the time) when they call me Lauren or Laura, but it doesn’t make me weary like it did when I was younger. I enjoy saying, “No, it’s Laurel – like the flower.” Associating myself with a flower feels just for me. A crown of laurel, the beautiful evergreen leaves, entwine and represent honor. My adulthood became a journey to embody honor, to grow into an individual of integrity and respect. Humanity is a gift to me, packed with wondrous surprises as I explore its depths. The work I do as a Life Coach is a life full of honor, the honor of walking intimately with others in their world. To be given the gift of knowing another’s inner world is, truly, an honor to me.

In my forty-third year of living, I became a divorced woman. What an inner struggle; the divorce process forced me to redefine myself. Early on, when I had inklings that my marriage may not be well suited to me, the inner, unspoken rule that kept surfacing was that divorce was for others, but not for me. I was married to a kind and good-natured man, we didn’t argue, we were wonderful parents together. How could I end the marriage? That is not a story for this day, but it was a journey into my integrity, into having my life be harmonious on the inside as my outer life became congruent with my deepest feelings. This process caused me to develop both honor and integrity. It seemed my ex-husband and I both grew our integrity and inner honor through handling the end of our marriage in the kindest way we possibly could. I am proud of both of us for this.

When I became divorced, I continued to use the name Laurel Neece because the obvious return to Laurel Wiljanen was out of the question. I cared about sharing the same name with my children, then aged 16, 14 and 9. At some point though, the desire to no longer share my ex-husband’s name surfaced. When eventually I raised the topic of changing my name, I got push back from my children, particularly my younger daughter. Not wanting to hurt them any more than I feared I did through the divorce, I let the idea of my name change be. But the urge remained within me to no longer be called Laurel Neece.

A few years passed and I began toying with the idea of name change again. This time I approached it more seriously, considering specific names. Returning to Laurel Wiljanen was off the table. Never once did I imagine going back “there”. Instead, I began making lists of names I liked. The process was fairly random. My thinking was – if I was going to change my name, yet again – why not to something I really liked, personally chosen by me? Because I didn’t want to go down the path of having to spell my name constantly, or repeat it, or correct others for it to be understood readily, the goal was to choose a fairly common name. As I mentally played with ideas, I shared my name change plan with my sisters, asking for feedback. My youngest sister, always full of great ideas, sent back a long list of family names from both sides of the family tree.

With a final decision upon me, the more traditional aspects of me surfaced. I wanted a family name; I wanted my name to have ties to my heritage. With that inner awareness, the choice was simple – Laurel Holland. I would take my maternal grandmother’s maiden name. Not only did I love the name, it met my simple criteria. And I loved my grandmother whole-heartedly. It was as if I was honoring her by taking this name. As I grew in my womanhood, I felt a Holland woman – strong, kind, direct, independent, and quietly loving. Both my grandmother and her sister could be described this way. The shoe fit.

The story still is not complete. To my surprise, the desire to be married again appeared after I fell in love with the man who is now my husband. He was the first to raise the topic of name change, saying he would encourage anyone not to purposefully take the last name Hajek. A difficult name for a variety of reasons, only one of which is it needs to be spelled. But just as with wanting another attempt at the art of marriage, I surprised myself with the desire to take this difficult name. I wanted to share a name with my husband, to be known together in this way. It seemed symbolic of our union and commitment. Keeping my chosen name of Holland as a middle name was the answer for me. So I find myself with, yet again, another name experience.

Today I use both Laurel Holland and Laurel Hajek. I am Laurel Holland in my work life. My married and legal name is Laurel Holland Hajek. I suppose this accurately reflects the truth that we play a variety of roles in life. Though not proposing that we all use different names in the many areas of our life, an awareness of how the name is a symbol of “me”, and that “me” is being expressed through what I do in the world, is ever-present to me.
This morning I was deeply in touch with the sacred act of sitting in stillness. Perhaps it was a sense of the holy that brought me into my name story. I like to imagine my name as “holy land” – Holland – a variation of that message. Indeed when I took this name I entered holy territory. I was committing to a life of honoring my inner world. That truth has expanded into a commitment to honor everyone’s inner world. That is the honor in my name today, Laurel Holland. I welcome others to open their inner doors, to put aside any fear for a moment or two, and step through that threshold together. What resides deep within each of us is holy land, a terrain of deepest truth and understanding, of intimate knowledge of love and universal truth about our humanity. Sacred space is right here within. Ah, that I could open that door for everyone. The key belongs to each of us individually though; the door must be opened by Self.

So, what’s in a name? I can only answer for me. My name represents the journey of my life, so far. It represents my deepest desire to continue to evolve, to know myself ever more deeply, and to serve others as they also enter the sacred space within. 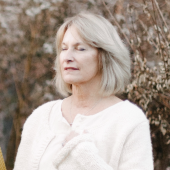 I believe there exists the opportunity for each of us to create a fulfilling life. My goal as a Life Coach is to help others find their way into the life that they truly desire. What I have found in my work is that many of us block ourselves unconsciously from what we say that we want. We may find ourselves stuck in old patterns and old beliefs that limit our potential to create effectively and freely. Often it takes someone with a fresh and unbiased perspective to help us see where we might be causing our own limitations. I offer my perspective in a kind and compassionate manner, always inviting my client to look through a new lens at how they are working with their challenges. Together we find a way to address change and find the courage to create life anew. I am on a journey of living life fully. Each day, listening to my heart for its callings, my answers come from within, where I have cultivated an inner peace that is my true home. When that peace is disrupted, I have the tools to navigate rocky waters and find my balance yet again. Sharing these life tools with others brings me great joy.