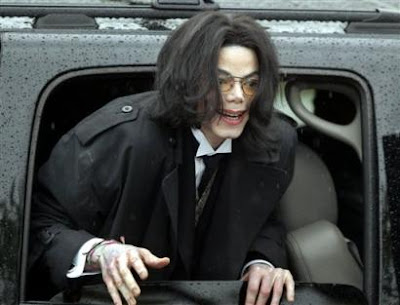 Are we a people who have become a lynch mob?. I am disturbed by the verdict of Dr. Murray. I feel that Dr. Murray made nothing more than a bad judgment call, which we have all done. I am 100% percent certain that Dr. Murray was doing what he thought was best in his treatment of Michael Jackson. People say he wasn’t in a hospital when the propofol was administered. MJ should be in a hospital every night of his life? One of the most famous persons in the world?..I think not!!..

House visits used to be the common practice of physicians. Hildamae was given to fainting spells and sudden migraines, and Dr. Davis would come to the house, quick as a flash, because Hildamae was so histrionic that she was probably enough to pay his  mortgage..and I would be watching for his car turning down the drive, a big black Cadillac.. and he would jump out of the Caddy, mustachioed, shiny Price of Windsor shoes, and a Turnbull and Asser cravat at this neck.(I know it was Turnbull and Asser because he had the label, and pricetag on it..sort  of a male, high class Minnie Pearl). He would come bounding into Hildamae’s bedroom, where he would administer the sugar pills and right away Hildamae was good as new again… As time went on, the sugar pills gave a rise in her blood sugar, causing her to become pre-diabetic.. Should Dr. Davis have been imprisoned??.

Could my family have sued?.. perhaps, but Hildamae was also very involved(demanding) of his services, and she knew, and he knew not to bite the hand that feeds you, because they were co-dependent..

The final verdict will come up at the end of the month..I can only hope the judge will do the right thing..

Any similarity between Hildamae and Dr. Davis in the following video is purely coincidental.