The Absurdity of Retail Merchandisers The Absurdity of Retail Merchandisers

First of all, please allow me to answer why I would join this site to post opinions when it is obviously entitled “Here WOMEN Talk”.  I did so because I like to express opinions and because this appears to be a site which allows me to do so.  Further, I am personally acquainted with a couple of the members of this site for whom I have a deep respect.  So, I am adding my man’s point of view to certain issues that trip by radar.

Today, being two days before Thanksgiving, which I have always considered the start of the FAMILY Holiday Season, I want to address the issue of these retail giants, and you all know of which ones I speak, who have chosen to disregard family values and open their businesses on Thanksgiving Day.  It is MY opinion, in spite of their proclaimed (by their advertising departments) that they support family values, such actions as opening for business on Thanksgiving Day is simply wrong!

I had to laugh out loud at Wal-Mart, and yes I’m calling names here, in a news report on national news Monday.  Wal-Mart is going to pay time and a half to their employees who work Thanksgiving Day.  AND, and get this, they are going to provide a traditional Thanksgiving meal in the employees’ cafeteria for those working that day.   Seems they miss the point that having a traditional meal in a non-traditional setting does NOT reflect family values.  While I am sure there are those employees who really don’t mind the extra money for working that day nor the time away from family, I can’t help but think this is part of what is wrong with our culture today.

My childhood memories of Thanksgiving Day are about watching the Macy’s Thanksgiving Day Parade from New York while Mama worked in the kitchen preparing that meal.  The smell of the turkey and the dressing and all the other good foods we would have floated through our small home as we three boys watched the floats, balloons and marching bands while waiting for Santa Claus to come along at the end of the parade.  That was our start of the count down to Christmas, BUT, there was the Thanksgiving meal first.   After our usual early afternoon dinner, all the neighborhood kids would play outside until dark.

If they had a “Black Friday” back in the 50s and 60s, I don’t remember them.  But I was just a kid then.  My first real memories of “Black Friday” was one such Friday about 20 years ago when my wife and daughter got up at 4:00 a.m. to be in line at some department store to get the “deals” being offered.  I still remember that my wife wanted a certain counter top “mixer” and she, in fact, came home with two of them.  One for her and one for a gift.  For several years after that first time, my wife and daughter would leave early to find the deals.  My wife gave it up a few years ago, but my daughter still enjoys the adventure.

The “Black Friday” issue is OK with me.  I find it ridiculous that some folks would  camp out in front of certain retailers to get in the door first.  There was actually a story on national news last week that a few guys were camping, tents, generators and all, in front of a Best Buy store somewhere so they could be first in the door.  I cannot imagine any material thing I would want that would cause me to do something like that but, if it floats their boat, go for it.  We are not all alike, thankfully.

But my issue bringing forth my words today is about Thanksgiving Day.  This day WAS a family day.  I think of my family, even now, sharing the day together, gathered around the table for the feast my daughter prepares.  We eat and talk, and really enjoy the time that we are allowed to slow down from school, soccer, and all the other events that occupy our time.  We laugh, I get a little choked up each time I’m blessing the food and thanking my God for the wonderful gift of family he has given me.  The grandsons go out to play, just as I did when I was a kid, and the adults sit around and talk about the day and about Christmas.  We always seem to look at the advertisements in the newspaper letting us know what is on “sale” and where.  Late in the evening, the wife and I head home, a lengthy 20 minute drive, and I sit down to watch “White Christmas” with Bing Crosby. That movie was one of my Mama’s favorites and I have been watching it on Thanksgiving night for more than 30 years.

Last year, certain retailers were opening late in the day on Thanksgiving, and although I hated that for those who had to work then, it still, in a manner of thinking, allowed family time for Thanksgiving.  They got away with that so now we are having stores open at 7:00 a.m., 8:00 a.m. or whenever on Thanksgiving Day.  I think this is a disgrace for American retailers.  Let me explain.

As idyllic as my life was as a kid, none of it was that way because I had a perceived “rose-colored glasses” approach to my youth. I have distinct memories of  my family being close-knit.  I had two sets of aunts and uncles and cousins living within a half block of me.   We could stand on the front porch and yell to each other.  We often shared Thanksgiving meals at one home or another,most of the time at ours (my Mama’s cooking).  But we always shared that.  We loved each other, cared about each other, and simply enjoyed being together. I don’t recall that we had an abundance of material goods, but we never realized it then.  What we did have made  up for any perceived advantage of material wealth.  There are only four of us left now.

As I observe things today, in most homes, the Thanksgiving meal, if there is one, is a hasty gathering to eat and then get on with other activities.  Kids run one way, teenagers another, and adults seem to have activities that remove them from the family participation in anything. Adding Thanksgiving Day as a retailers’ ripoff adventure is just another outlet,  And we wonder why there are little “family values” left. Seriously?  To me, it is not difficult to determine why there is such a disjointed society out there today.

So, ladies, what are you plans for Thanksgiving?  A family time?  Or feed the retailers time?  Is there anything you want, or need, on sale for such a huge saving on Thanksgiving Day that you can’t find on Friday for maybe a few dollars more?  How much is it worth to have a day with your teenager who will be leaving home for college before you can blink twice?  How much is it worth to watch the little kids as they play in their worlds of imagination?  Can you find that at Wal-Mart?

My “Black Friday” will be spent decorating the house for Christmas.  Another tradition started with my Daddy. We never put up the first Christmas decorations until the day AFTER Thanksgiving.  He had a thing about being thankful for all we had.  Maybe he had a special reason for that thankfulness as he fought in the Pacific for 3 years as a  part of the “greatest generation”.  But he did teach his three boys that the most important thing in life is NOT for sale at any store and is, actually, free.  This Friday night the lights on the Christmas Tree in the living room will twinkle their colored brightness, none of which will be BLACK.  As the retailers are counting up their money, quite possibly YOUR money, I will be counting my blessings.

Happy Thanksgiving to every one of you!  Remember, the key word there is THANKS. 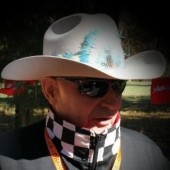 Venturing out into another area of life with blog postings on this site. Another year older as of October and still trying to believe I'm not still 21. Oh well, with age comes beautiful memories and sometimes hurting backs.